A Stitch by any other name...

on January 03, 2020
One of the best things about crochet is its versatility. While knitting is developed from 2 main stitches (knit, purl), crochet starts with more stitches in its arsenal, and since you're only working with one stitch at a time (unless you're doing Tunisian crochet), you have more flexibility to change height, direction, etc. You can make a solid fabric, with either a smooth or textured feel, a delicate frothy lace confection, or anything in between. New stitch combinations are developed by designers and with the internet and social media, these designs can be shared around the world with a few clicks!

The flip side of this is that some stitch combinations are called by multiple names. Sometimes I think I'm experiencing deja vu when I start to follow a new pattern and realize that I've done the stitch before, but it was called something different. If you use Ravelry, it can be frustrating to try and find a pattern if you remember the "wrong" name that they called the stitch, and there are too many for Ravelry to track them all. 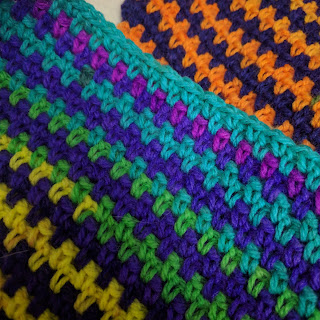 For example, a solid panel made of alternating single crochet & chain stitches, with the following row SC into the CH, is called Granite, Linen, Moss, Sand, Seed, Tweed, and more names, depending on who you talk to. In this example, I alternated cakes of yarn every other row to get the striped effect. 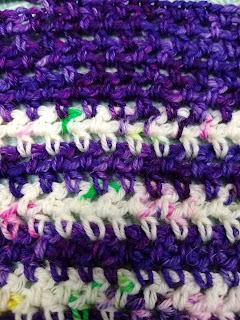 This is a variation on moss stitch, using HDC instead of SC, which makes it more open, because HDC is a taller stitch.


If you alternate DC & SC, it may be called Cobble, Griddle, Lemon Peel, Mixed Grit... 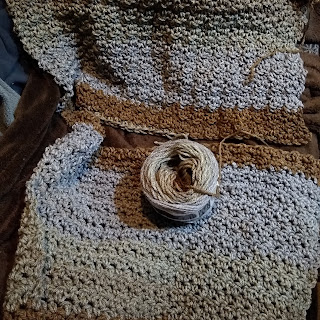 I don't think there's an easy solution. I've started a list of stitches with their alternate names, to help me remember. 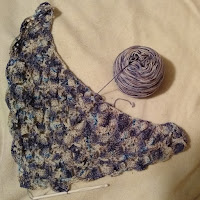 A Tale of Two Projects Begun

I recently started crocheting Rachy Newin 's From the Ashes shawl, using two colors of Northern Bee Studio 's  Sturdy Sock (I have started with Tidal, which is delicious shades of grey and blue, then will border with Star Dust, which is a deeper palette of brown and purple. Shown below are the two cakes, without and with flash.) To be sure the shawl would block out nicely to show the pattern (since the variegated colorways obscure it somewhat), I sized up to an H hook, as opposed to the suggested F hook. Two sizes isn't a huge change, but I think it will be helpful. I picked these up from Serendipity Fibers a few months ago without a specific pattern in mind, though I knew I wanted them for a shawl. They waited patiently as I started and stalled on multiple projects in heavier yarns, then after I finished my Amelia Raglan I wanted to stich something with lighter yarn and caked these two so I could attend the weekly Open Stitch on Thursday. I have the pattern on m