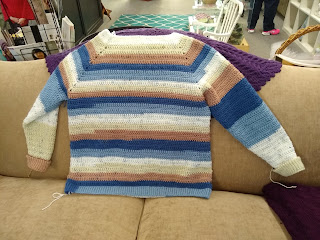 I finished my Amelia Raglan a nearly two weeks ago (this photo was taken at the LYS I go to, before I wove in the ends). I'm mostly happy with the finished sweater and I think I learned more about raglan shaping. I also learned how stretchy a back-loop-only (blo) slip stitch edging is - I used it on the bottom band and on the sleeves - I didn't join the sleeve binding (which are stitched sideways from the sleeve), so it can be folded back and one of my friends at the LYS said it reminds her of French cuffs.

I ended up with too much room in the high bust area - my fault for misunderstanding how to size raglan shaping, i.e., where to separate off the sleeves. After starting following the pattern, I frogged back to adjust the front and back sections, adding 6 to each, while keeping the sides the same as the original pattern. This prevented the sleeve openings from being as large when I separated the sleeve sections from the torso, which was the original problem. That is certainly one of the advantages of top-down construction - you can try it on and adjust as you go. 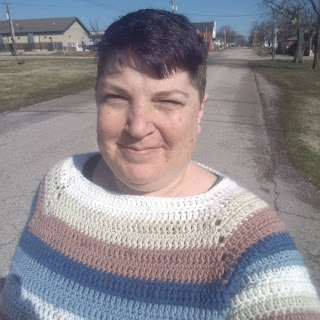 Instead of a starting chain, which the pattern called for, I started with foundation single crochet. Which came in handy when I decided at the end to snug up the neckline. The neckline started with the beige, I added the white at the end, decreasing every round at the 4 raglan points. It looks a bit different from the original rows, mostly because it lacks the holes of the increase points, but I don't think most people will notice and more importantly it fits me better.


I'm not sure if I was just super distracted while making this, but it seemed I spent a lot of time frogging and restarting sections. Not any problem with the pattern as it was written, I think just because I wanted it to fit the way I wanted. Originally I was thinking of making this oversized, but decided not to. In part because one of the Ravelry reviews I read said that their project stretched out after being laundered. I didn't experience any stretching but I was glad that it was softer after coming out of the dryer. For whatever reason, the "sprinkles" of contrasting color were rougher than the rest of the yarn while I stitched with it.

The yarn I used was Caron Big Cakes in Blueberry Scone, this was part of my Tuesday Morning haul. Each aran-weight cake has 603 yards, so I was able to make my sweater with less than 2 cakes - I stopped on the first cake after finishing the bottom band, so the sleeves and neckline add-on were from the second cake. I started a hat with some of the leftover yarn and expect I'll still have some left after that, as well as some untouched cakes. I'll probably not make another garment out of this yarn, at least not until I see how the current sweater holds up to laundering. The weather is getting warmer anyway, so I'm looking at lighter garments.

You can see more photos on my Ravelry project page, if you're so inclined.
Crochet