on January 06, 2020
It's rare these days for me to follow a crochet pattern exactly. Sometimes I'll use a different yarn, so will have to adjust for the gauge or figure out how the stripes will affect it rather than the solids in the original pattern. Other times I'll change some of the stitches used - I'll almost always use foundation crochet rather than chaining and then stitching into the chain, partly because the foundation gives a stretchier edge, and also because I invariably make my chains either too tight or way too loose and I'm unhappy with how the edge looks.

So patterns are great for inspiration and providing a place to leap from. Don't be afraid to dive into an experimentt - if you try something and it doesn't work out, you can always unravel it and go back to the pattern. After all, frogging is part of the process.

I fell in love with the dramatic bell sleeves of this sweater by Chasing SunRaee Designs, but when I watched the tutorial video I immediately decided that instead of making a front, a back, and sewing them together, I'd make the body in the round. I also decided not to make it as cropped as the original. 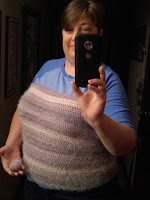 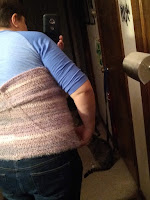 So this is my progress as of last night, pardon the awkward mirror selfies - a  tube of fabric, made with 45 rounds of half-double crochets, enough to go around me with positive ease (no, I haven't counted, but I'll need to, in order to ensure I attach the sleeves at the correct points). When I got to the end of the round, I joined with a slip stitch to the starting ch2, then turned, ch2, and made my first hdc in the same stitch. You can see the join, but I decided I'd rather have the bulk of the ch2 and hdc in the same stitch rather than any gapping. This is one full cake of the Caron Latte Cakes - 530 yards - the small ball leftover was just shy of a complete round. This size crocheted tube also makes a nice plush cowl that can be wrapped double for extra cozy factor. I may make a reversible cowl with some Latte and another plush yarn after I've finished the sweater.

The next step will be attaching yarn for the sleeves/yoke section. Since I'm not making a front/back and sewing them together, I'm going to attach and work on one half, make a head hole halfway, then keep going, and when it is the same length as the first half, attach it to the other. I haven't yet decided whether to start in the back or the front, I don't think it will matter much - the fuzziness of the yarn will likely obscure the difference in the direction of the stitches (when the yoke is rejoined to the body, the yoke stitches will be upside down from the body).

Once the yoke/sleeve section is done, the sleeves will be a bit less than elbow length. The bell portion is made perpendicular to the y/s section - I'll stitch into the edge of the sleeves, then increase along the bottom edge to create the bell, just as Chasing SunRaee demonstrates in her video.

The last step will be finishing the neck. I want it to be a little loose, as shown in the original, and I'll decide how tall to make the neck once I'm working on it. Since the sleeves will be dramatic, I don't want to do a cowl neck.

Overall, I'm enjoying how this sweater is working up. It's simple shapes, but there's a bit of a puzzle in how to attach the parts, since I'm not following the pattern exactly. The yarn is soft and silky, I think it will be fun to wear and it slides on my aluminum hook. The slipperiness is another reason I'm glad to not be doing much seaming - securing the ends will be a challenge. This is my first time using Caron Latte Cakes - I've also worked with the original Caron Cakes, the Tea Cakes, the Sprinkle Cakes, the Big Cakes, and the Cupcakes. I haven't tried the Cotton Cakes yet. The closest Michael's is an hour away, so I don't get there often. I found some of the Big Cakes, Tea Cakes, and Sprinkle Cakes at Tuesday Morning - they often get discontinued yarns & colorways, and sell them at a discount. IIRC, they were $3.99 per cake, much less than the original retail price. 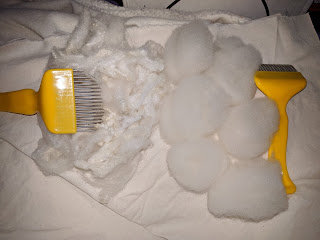