on December 13, 2019
I recently bought some Lion Brand yarn on clearance at Meijer's, when I was up in West Lafayette for an event. I got a bunch of cakes of Cupcake, which is similar to Mandala, a few skeins of Scarfie, and several Shawl in a Ball. Most of the Cupcake colorways I chose were blues & greens, but there was one cake of Sunny Day that I decided would be perfect for a one cake shawl project. 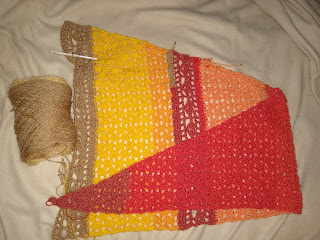 Asymmetrical shawls are very popular right now, and while I enjoy making them, I'm still figuring out how to wear them - the skinny end always looks a bit odd to me. How do you like to wear them?

I spent some time on Ravelry, browsing through pattern options - when you start using the filters you can get lost in pattern hunting for quite awhile. Ultimately I decided on the Quicksilver Shawlette by Tamara Kelly of Moogly. She used two contrasting solids, but I knew it would work with the long color changes of Cupcake, with some minor adjustments.

I started at the red tip and followed the pattern until the first pattern change. I cut the yarn when I stopped the first section, then started the contrast panel from the opposite end of the cake. When I went back to the main pattern, I cut the yarn so I'd start with the next color, and alternated that way throughout, though after the first section, I switched patterns at the color change, rather than strictly following the pattern instructions.

This was a great pattern, easy to follow, as Moogly patterns tend to be. I think the original color scheme works better than my candy corn version, but it made a nice experiment.

I need to get better photos, but this is the shawl. Do you like wearing asymmetrical shawls? I'm always a bit confused what to do with the skinny tip.
Crochet