Wrapping my Mind Around a New Warping Technique 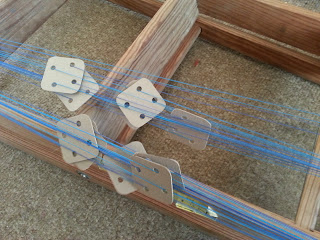 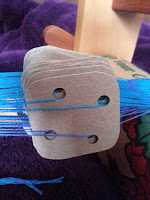 I recently got a new-to-me loom at a yard sale run by a former member of the SCA (medieval research and recreation group). It's a small tabletop loom, made by +Michael Houghton (SCA name: Herveus D'Ormonde) of White Wolf and Phoenix, though I didn't realize it was one of his when I scooped it up at the sale. It was quickly recognized when I posted photos on Facebook and Google+, and Herveus (who I know from SCA events) asked if the apron sticks had come with it, because they weren't in the picture. When I said they were not included, Herveus sent me a replacement pair. As soon as they arrived, I dug through my baskets to choose yarn or string, and settled on 2 colors of 10/2 cotton, turquoise and blue, which I'd purchased a few years ago from Herveus' booth, likely at Pennsic (the SCA's largest event, it goes for 2 weeks near Pittsburgh, PA). I didn't find any of my tablets, but I had some cardboard, and set to making a new set of cards. 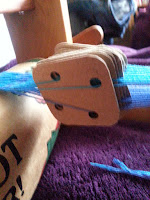 The cards are 2 inch square, with the corners rounded off. I've been referring to them in my mind as "drunken tablets," because when I punched the holes in them, using a 3-hole punch, I miscalculated the measurement, so the holes are shifted a bit away from the corners. They work, but at some point I'll make a sober set (and/or retrieve my others - most of my craft supplies are in a storage unit in PA, and I'm in IN, so they're not easy to retrieve at the moment, but I got a job, I start Monday, so I can resume saving for the retrieval of stuff).

Unlike warping on an inkle loom, for this loom it seems you measure your continuous warp first, then transfer it to the loom. After looking about the house for a suitable thing to put clamps on, which I'd then wind the warp strands around, I settled on our wood step ladder, which lives in the garage. It's a little chilly in the garage this time of year, and I wanted to be able to lie it down, so I was winding the warp horizontally, so I brought it into the dining room. The cats were very curious about the process.

When I first tried tablet weaving (aka card weaving), I used cut lengths for a threaded-in design. Which meant having a bunch of cut ends to deal with - I used an overhand knot to wrangle them together. Awhile later, I learned the continuous warp on the inkle loom, and you shift the entire piece around the loom as you work. But again, this loom is set up differently, and although the continuous warp gives you a set of loops, they're arranged much differently. This video demonstrates the process better than I could explain it.

One thing that confused me at first was that I was used to having all the strands lined up nicely in the order of the cards. However, with this method, one side of the loop has a card on the left, and the other side of that same loop has a card on the right. So unless I'm misunderstanding something, you can't actually get the loops lined up. But since you generally cut the ends when you're finished, and braid or otherwise finish them, I don't think it will matter much in the long run. 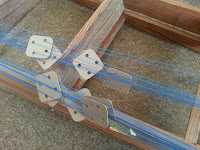 I did forget to drop a card about 2/3 of the way through the warping - which I discovered when I was straightening the cards, making sure they were all oriented the same direction. So that meant winding off the cards back to the length of warp threads that should have had a card, slide a card back to it, and then rewind the warp, sliding a card back to the correct point each pass. The photo to the left shows the two sets of cards as I'm dropping them. On the right I'd begun straightening them. 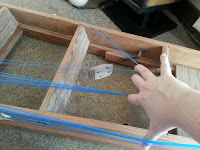 I don't have a nice warping tool as is shown in the video, with eye hooks to thread each strand through, so I improvised with some small plastic containers. The lids don't close well, so I put a rubber band on the side opposite where the thread comes out (I considered poking a hole in the container, but was concerned the rough edges of the hole would damage the thread). After winding a few cards, and having the containers get tangled up in the threads, I realized that the spokes of one of our dining room chairs would work nicely to keep the threads separate. Warping went much more smoothly after that discovery, and the cats had less to play with, so wandered off. 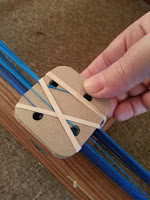 Once all the cards and warp were wound correctly and oriented the same way, I tied the ends together, then rubber-banded the cards together so they wouldn't shift. I realized later, when the cards were on the loom, that the left cards were oriented differently than the right cards. Which wouldn't be a problem if my cards weren't "drunken" tablets. It might not be a "problem," per se, even so, but if I want all the cards threaded the same way (glancing at my loom right now, I can see that the right half of the cards are S threaded), the holes of the left cards don't line up with the holes of the right cards. You can see I haven't marked my cards yet. Rather than write on the faces of the cards, which you can't see anyway when they're all in a clump, I typically color the rounded corners, with 4 different colors of marker. I haven't done so yet this time, because I haven't decided what to do about my "drunken" mismatch. I suppose if I'm going to be using these cards always for continuous warp, the left side and right side will be opposite each other, so I could mark them as they're currently lined up now. I was able to get all 20 cards from a single sheet of cardboard, and I have more cardboard, so I can always make more. And if I tire of the cardboard, I can use playing cards, as a lot of people do. 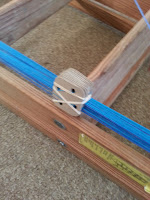 Because I was taking the loom & warp to my LYS for the weekly social, I slid the cards to one end, then chained the warp and tied the ends so they wouldn't get tangled in transit. I didn't get any photos of that, or of the winding on process, since I was using both hands to wind and keep tension on the warp.


I did a few rows of weaving at my LYS, but wasn't happy with the tension, or how the strands were laying on top of each other, so this morning I took the warp off and re-did it more carefully. You can see in the photos above that they're reasonably orderly. I used some scrap cardboard from making the cards as spacers. 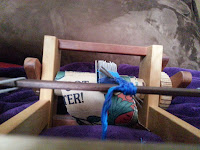 I knew from previous conversations with Herveus and others, and from reading tutorials and watching videos, that it's a good idea to use heavy paper to separate the layers of the warp. A brown paper sack, torn into strips a little narrower than the warp beam works, and you just overlap the strips as you wind the warp on. At some point I'll buy a roll of brown kraft paper, as Herveus mentions on his website, but for now, the paper sack seems to work just fine.


I realized shortly after I started typing this post that I'd neglected to wind the warp up over the front and back beams - instead they're going from one warp beam to the other, which doesn't offer as much space. Since my tablets are small, it wouldn't be too much of a problem, but I should be able to slide the cords off the front apron stick, and adjust everything. 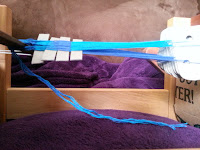 The twist in the threads I hope is just the nature of the beast of this type of continuous warp, and won't be noticeable once the weaving gets underway. I didn't see any way to straighten it, so I'm going to leave it.

So that's where I am. I had errands to run in Evansville today, getting things taken care of in preparation for starting the new job, and I went to see Deadpool, which was funny and violent, and I enjoyed it immensely. When I got home, I heated up supper, played with the animals, then my parents came home from going out for supper, and after talking with them, I started writing this. 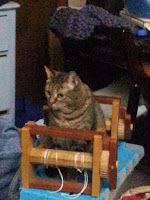 I really like how portable this loom is. My inkle is portable, and I take it places, but it takes up a lot of space, in my car, at events, etc. Not in comparison to floor looms or anything, but this new loom is compact without sacrificing maximum warp length. I can get 11ft (not including fringe) doing inkle weaving on my inkle loom. I'm guessing, because of the structure difference between inkles and tablet weaving, I'd get slightly less length on a tablet-woven band. I didn't bother to measure the warp I put on my tw loom, but according to the WW&P website, the larger tw loom can hold up to 15 yards of 5/2 warp. I have the smaller loom, so I would imagine it would hold slightly less. I love the two-toned effect of the different woods used to construct it. Of course, the cats think it's some sort of chair for them.

I've been posting on Google+ for awhile now at Cozy Badger Fiber Arts (I'd previously blogged and posted under a different name, but when I moved back to Indiana, decided to rebrand, and I'm happier with the new name.). But this is my first official Blogger post here.

A little about me.

As of this year (2015), I've been playing in the Society for Creative Anachronism (SCA) for twenty years. A big reason why I've stayed active is because it gives me ample opportunities to dabble in a variety of hands-on classes. My primary interests are in the fiber arts (spinning, weaving, felting, etc.) but I love taking classes at events, talking to artisans about their passions, and gaining insights into how things work. I also love sharing this knowledge, though I sometimes struggle with the self-confidence to put myself out there as a teacher.

I learned to knit from my maternal grandmother, along with my older sister, when we were young. I didn't have much patience for it …

I'm playing around with a new template, going for a more streamlined, professional look. But as I rebuild, some links may not work. Please be patient, there is new content percolating!