on June 11, 2015
I've been posting on Google+ for awhile now at Cozy Badger Fiber Arts (I'd previously blogged and posted under a different name, but when I moved back to Indiana, decided to rebrand, and I'm happier with the new name.). But this is my first official Blogger post here.

A little about me.

As of this year (2015), I've been playing in the Society for Creative Anachronism (SCA) for twenty years. A big reason why I've stayed active is because it gives me ample opportunities to dabble in a variety of hands-on classes. My primary interests are in the fiber arts (spinning, weaving, felting, etc.) but I love taking classes at events, talking to artisans about their passions, and gaining insights into how things work. I also love sharing this knowledge, though I sometimes struggle with the self-confidence to put myself out there as a teacher.

I learned to knit from my maternal grandmother, along with my older sister, when we were young. I didn't have much patience for it - I think the biggest piece I managed was a doll-sized shawl. My sister knitted a sweater, but when she finished it, she didn't like the fit, and hardly wore it. A few years later, I tried crochet (taught myself from books), but made my stitches so tight I could hardly fit the hook in to make the next row. In high school, when my grandmother passed away, I took the afghan squares she had been working on, along with her knitting needles and crochet hooks, and decided to finish her afghan. But I didn't like the colors or the yarns she'd chosen, and I was getting ready to start college, so my progress was sporadic, and I'd frequently have to rip out stitches and refer to instruction books to refresh my memory.

My senior year of college, at an SCA event, I was fascinated watching a woman create yarn using a drop spindle. After I sat for a few minutes, asking occasional questions, she told me to go to the Arts & Science table and ask for a beginner spinning kit (a spindle and a bag of coarse wool). Returning with my kit, I sat next to her again and learned to spin. Dropping the spindle repeatedly, but eventually working out proper tension so that I was able to draft the fiber out and twist it enough to make yarn. When I'd spun all the yarn available, I turned it in to the A&S table, writing my name down, because they were having a contest. It was nearly time for court, so I found a seat with some of my friends, and watched as people were recognized for service, martial prowess, and excellence in arts & sciences. The Minister of Arts & Sciences stood up, and announced they had had two spinning competitions during the day a beginner group, where everyone got a certain amount of wool (by weight), and the yarns were measured to see who had spun the longest piece. The advanced group was given as much wool as they needed during the day to spin the most yarn. The woman who taught me how to spin (I've since forgotten her name, I'm embarrassed to say) won the advanced group, and I was called up as the winner of the beginner group! I was given a brass ring that had been turned into a double spiral. It's still my favorite piece of SCA bling, as simple as it is.

A few years later, working at Buffalo Run Farm, Grill, & Gifts, the owner (who did frontier reenacting as his work schedule allowed) said that he had a buffalo leather pouch that had been sewn with buffalo sinew, and he'd like to have a woven strap made for it out of buffalo yarn. I said that I knew how to spin (though I hadn't done any since graduating from college), and we struck a deal - he paid me ahead of time, so I could purchase a pair of handcards, that I then used to card the buffalo fiber collected from the pastures, and spun it into yarn. Because much of the buffalo was matted, it was slow going, and I approached him with the idea of weaving a pattern with buffalo and hemp yarn. I believe the strap was cardwoven. The hemp provided strength to the strap, because the buffalo, being a fine fiber, was not terribly strong, and I was not yet a proficient spinner.

After spinning buffalo, I found a wool shop not too far away, and purchased Jacob wool roving, and EcoSpun (made from recycled plastic bottles) top. Spinning the clean processed fibers was a joy, and from there I started sampling whatever fibers I could get my hands on! I bought a few spindles, not being satisfied with the wobbly toy wheel & dowel spindles I'd assembled myself from the craft store, and bought a Babe (PVC) wheel not long after.

I also tried knitting and crocheting again, and found that crochet was my preference. I now love crocheting with my handspun (though I crochet with commercial yarns as well).

In the years since, I've learned (at least the beginning of) several small weaving techniques: inkle, tapestry, triangle, backstrap, warp-weighted, stick/peg loom, and more. I've also learned wet and needle felting, some embroidery stitches, nalbinding, lucet, fingerloop braiding... and have been considering dipping a toe in sprang - I just need to set up a frame.

Currently, most of my craft materials are in storage in PA, though I'm saving up to retrieve them.
Archive State of the Badger 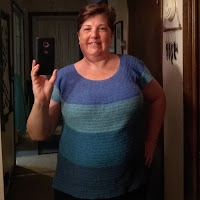